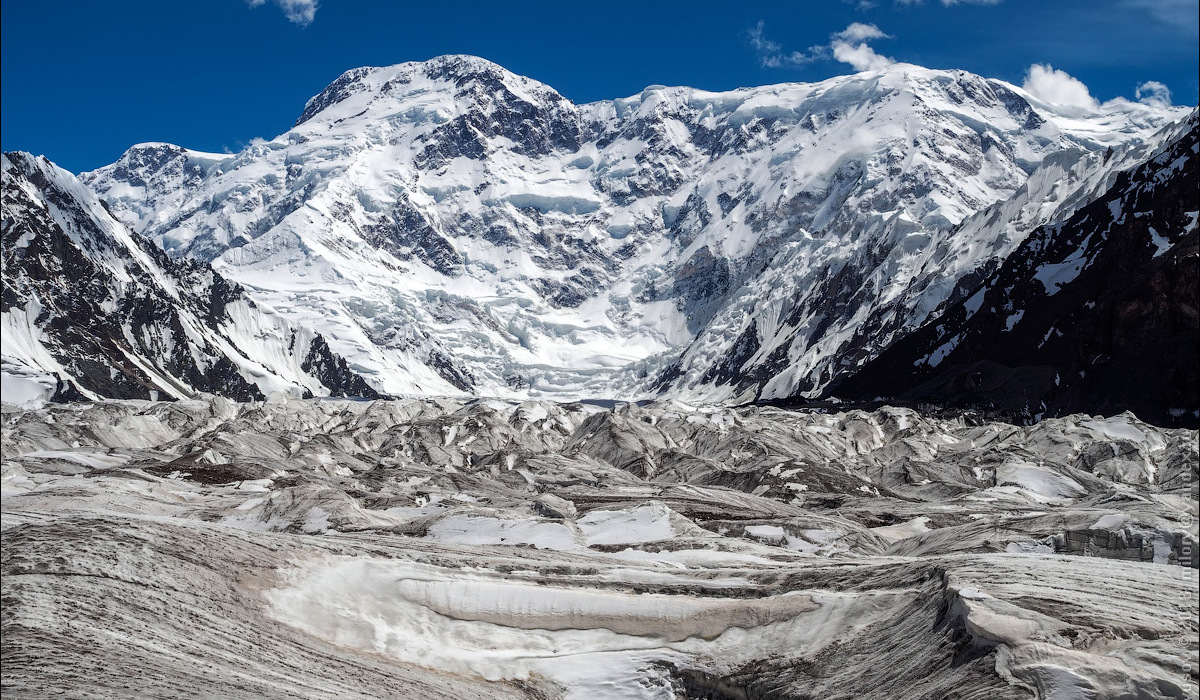 History.
Pobeda Peak (7439 m) was geographically discovered in 1943, but not successfully climbed until 1956, following tragic ends to many of previous
attempts. Following V. Abalakov’s initial ascent, an expedition led by I.Erokhin in 1956 was the first to climb it via the Chon-Teren Glacier and in
1970 A.Ryabukhin’s expedition achieved the first complete traverse of the massif from east to west. Pobeda can be a savage mountain. Generally
obscured by thick cloud even during periods of relatively good weather, it is subject to unpredictable and violent snowstorms and extreme winds
that blow from the Takla Makan desert. There are 8 established routes on Pobeda Peak, the most difficult being on its northern slopes.

The route.
The most frequently climbed route (established by D. Medzmariashvili in 1961) is to West Pobeda Peak (6918m) via the Dikiy Pass (5200m). MC
offers this route although ascent tactics varies according to the level of experience of expedition members and conditions prevailing on the mountain.
Any aspect of the programme may be adjusted to suit clients preferences.
From South Inylchek Base Camp (3995 m) it is 15 km approach along the Zviozdochka Glacier to reach the northern wall of Pobeda Peak.
Ascend along the icefall to the Dikiy Pass (5200 m) where Camp 1 can be established. Fixed ropes can be used for protection when crossing difficult
sections.
Continue ascent along the ridge. Camp 2 should be set up at the altitude of about 5800 m, just before the rocky section. A snow cave is often established
here, affording protection from cold winds that blow from the west.
From Camp 2 (5800 m) ascend along the snow, ice and rock ridge to the summit of West Pobeda Peak (6918m). Camp 3 can be established on the
South side of the main range, which is more protected from the wind. It is recommendable to use a snow cave.
From Camp 3 (6900 m) it is a 4 km traverse of the west ridge to the summit. Number of camps along rote could be more.
Descent follows the same route and takes two days.

Scheme of the route to Pobeda Peak 7439m
Description of the route to Pobeda peak (7439 m) along the Western Ridge over Dikij pass and Pobeda West.0-1: From BC beneath the Gorkij Peak cross the South Inylchek Glacier towards the Zvezdochka Glacier. Walk along
Zvezdochka Eastern lateral moraine till the bend of the glacier. Before the icefall (a small bend of the glacier)
the group reaches the middle part of the glacier and takes the right turn towards Dikij pass. A first camp is
beneath the Dikij pass. While pitching the camp be on alert: there is an avalanche danger from the Dikij pass
and ice falls from the Northern wall of Pobeda peak. A walk from BC to the camp 1-st is 5-10 hours.

4-5: From the black rock triangle way to the Western Pobeda is 4-8 hours, the steepness is 15-20 degrees, class
of difficulty is 2-3. The way lies over snow-ice fields with rare rocks. It is better to pitch a camp in the mould
of one of the South-Western summits of the Western Pobeda. There is enough place in the mould to pitch a tent
or make a snow cave.

5-6: From Western Pobeda to the pre-top rocky ridge (the root of which is called “Obelisk”) there are 3 km of wide
snow ridge (4-6 hours). Cornices and ice crevasses are possible. Beneath “Obelisk” in the big mould possible
to take a shelter from a very strong west wind, pitch a tent or make snow cave or iglu.

6-7: After a walk from “Obelisk” along the rock ridge (200-300 m), then along the ridge of mixed rocks and
snow-ice places with the steepness of 20-40˚ get to the summit. The summit resembles a dome of 200-250 m,
where it is difficult to determine the highest point. That is why those groups, which ascend from the western
side leave a top message in the western part of the dome, those ones, which ascend from the North or East – in
the Eastern part. From “Obelisk” to the summit is 4-8 hours walk. Descent takes the ascent route. Camps for the
nights depend on weather and other circumstances.