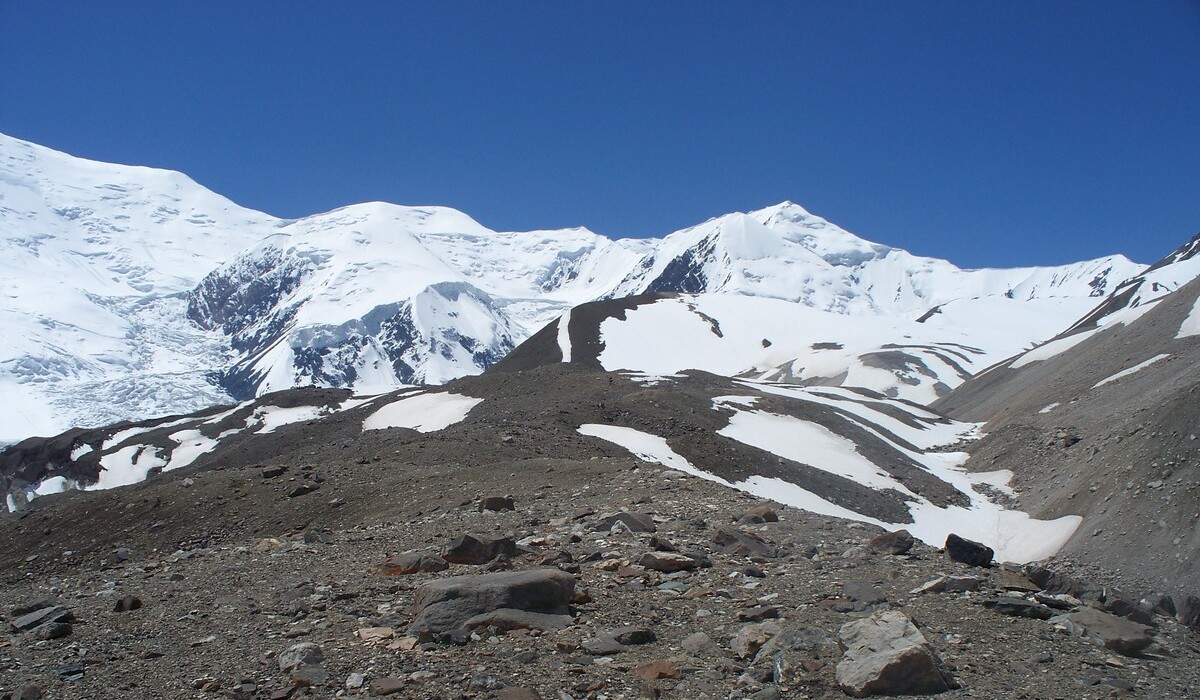 Lenin Peak (7,134m) is one of the easiest of the World peaks over 7000m. It is situated in Zaalaisky Range of Pamir mountains on the border between Kyrgyzstan and Tajikistan. It is located in the biggest City of the Osh International Airport. There is a 290 km road from Osh City to the Base Camp (BC) in Achiktash region. It goes through Osh – Gulcha village – Taldyk pass – Sary–Tash village – Kashka-Suu village – Achiktash district. 255 km of 290 are paved highway and 35 km is gravel road. Travel time by car is about 5-7 hours. The 90th anniversary jubilee of the first ascent  was held by Kyrgyz Alpine Club Mountaineering in July 2018.

It is possible to go from BC to Lukovaya polyana (onion glade) by foot or by car (6 km). From Lukovaya Glade the trail goes southwest along the rocky ridge up to the Puteshestvennikov pass (Travellers’ pass). The ascent takes about 1 – 1.5h. Further the trail goes downhill for 15-20 min and then for about 30-60 min it goes along the same ridge with a slight climb up to the crossing point. The crossing of the river is usually not a problem in the morning when the water level is not high and it is possible to cross by jumping over the stones. However, in the hot afternoon the water level is increasing and river crossing can become very difficult and dangerous. After the river the trail follows for 1.5 – 2 h on the moraines till ABCamp. In total it takes about 3-5 hours to get from BC to ABC.

The trail to Camp 1 first goes in direction to the centre of the northern slope of Lenin peak then up to Lenin glacier and follows up to the beginning of ascent. This part of the glacier and moraines is flat. There are some scours and cracks which can be easily avoided. It takes about 45-60 min from ABC to the beginning of the ascent. The ascent follows icy northern slopes covered with ice with the angle of 15º -30º which at some parts become 40º. There are some deep wide crevasses which can be traversed. Narrow cracks can be jumped over or crossed by the snow bridges. After this part of the trail the path goes along the slope into syncline (5000m) and further along the slope in southwest and west direction into C1. Starting from the ascent and up to C1 it is necessary to proceed in rope team. The ascent time is 5-9 hours.

From C1 the ascent goes to the left of rocks up to the shoulder of the range to Razdelnaia. The steepness of the slope is 15º-30º. C2 is situated on the left side in 100 meters from the Razdelnaya summit. The ascent takes up to 4-7 hours.

Taking the climbers for an acclimatization usually takes 1 day (to hike from C1) up to the summit and back. First, there is a short descent to the saddle between Razdelnaya and C3 of Lenin peak range. The ascent goes from the ridge up the snowy slope with occasional access to the rocks and narrow flat ridge up to the summit. To guarantee the successful ascent usually C3 is set up here at the altitude of 6400m. Further, the trail takes up the ridge to the narrow 100m long ascent with 20º-30º steepness called “the knife”.

It is compulsory to use harness at this stage. Follow the ridge up to the pre-summit plateau (6900-7000m) and continue up to the summit along the flat snowy slopes. Tour in the shape of Lenin bust is located a little bit lower of the summit, which is 100 m to southeast. The descent follows the ascent trail. It is strongly recommended for ascent to start off from C2 as early as possible, not later than 5 am. The time of ascent and descent is 10-14 hours.

Technically the route is not difficult, but summiting depends on the choice of tactics. Among the main difficulties and hazards are the altitude, crevasses, avalanches and bad weather. Proper acclimatization becomes of the main significance. Climbing experience of the Lenin peak proves that the most appropriate acclimatization is 2 goes with 1-2 nights in C1 and C2 and descend to the BC for good rest.

The ascent during acclimatization should be consecutive to the increasing altitude. Acclimatization hikes should start very early – before 5 am. Start from C2 to summit is recommended, not later than 3 AM.

Acclimatization is often combined with transporting and setting up of intermediate camps. If mountaineers lack climbing experience at the altitude, it is strongly recommended to go on acclimatization climbs with experienced mountain guides or instructors. Also, if climbers do not feel confident in their strength and experience, it is advised to set up additional camp at the altitude of 6400m.

Among the technical skills, ensuring safety there are command of the language and skills on eliminating and minimizing different hazardous factors of the ascent. These are the following:

1) Ice crevasses from ABC to C1 which require skills of climbing in rope team on the glaciers, crossing snow bridges over the crevasses, conducting search and rescue with disposed equipment and skills on self-rescue from crevasses;

4) First aid skills. For ensuring the effective search and rescue operation it is necessary to register with the relevant rescue company (www.rescue.centralasia.kg ) at least 1 month before the climbing and also possess the proper insurance policy (up to EUR30000) covering possible rescue works.

Note: Duration of programme can be changed by request.

–in Bishkek: Hotel 3* – for 1 night (including breakfast)

–in Base Camp: tents on double sharing basis + warm mattresses

–in Advanced Base Camp: tents on double sharing basis

–in Base Camp: tents on double sharing basis + warm mattresses

–in Advanced Base Camp: tents on double sharing basis

– – in Base Camp: climber’s own tents

– – in Advanced Base Camp: climber’s own tents

– – in Base Camp: climber’s own tents

– – in Advanced Base Camp: climber’s own tents

Services available at extra cost (not included in standard programs)

Transfer / flight from Almaty to Bishkek and Osh.

NB: Kyrgyz Airlines reserves the right to change airfares without prior notice (ITMC has no control over or responsibility for this).

Note: Prices for 2*, 4*, 5* Hotels, Guest Houses and Apartments are available on request.

Meals in Osh and Bishkek

Services available at extra payment in Base Camp and in Advanced Base Camp:

Dehydrated meals for ascent: by price list:  US$ 25 per person per day

Note: Empty canisters have to be returned to the Base Camp – this is the client’s responsibility

Mountain Guide: US$ 2500 per programme

Mountain Guide trained according to programme of UIAGM standards: US$ 3500 per programme

NB: We recommend a maximum guide to client ratio of 1:3. For groups of 4 clients two guides are recommended. A minimum of US$950 is charged for Mountain Guides for any number of working days, or if the Guide’s employment

is terminated by the client during the first 5 days.

Thuraya airtime, when using satellite phone for calls and sms, is charged according to usage, in addition to the rental price.

A satellite phone is available for use at ABC, calls cost US$ 4/minute and SMS US$ 2 per SMS.  There is no rental charge for use of this phone on site at ABC but payment is required for any calls made or sms sent

Prices are valid for groups booked and fully paid 8 weeks before the arrival or earlier. In case of late booking and payment (less than 8 weeks) an extra charge of US$70 per person is charged for formalities.

For individuals and groups of up to 4 climbers transport from Osh to Base Camp and from Base Camp to Osh is provided on a shared basis and the day of transfer is variable depending on demand. The departure schedule of transfers should be reconfirmed with ITMC in advance. In rare cases for those who book arrival before July 15th or departure after August 20th an extra day in Osh or in Base Camp may be required.

Climbers are responsible for providing their own personal mountaineering gear and for choosing their own tactics for ascent.

Kyrgyz Airlines operating domestic flights Bishkek-Osh reserve the right to change airfares without prior notice (ITMC has no control over this and is not responsible for any changes or inconvenience incurred).

The Domestic Flight baggage allowance is 15kg per person, overweight  in excess of this is charged at US$1/kg.

Climbers must have medical insurance with a minimum cover of US$40,000