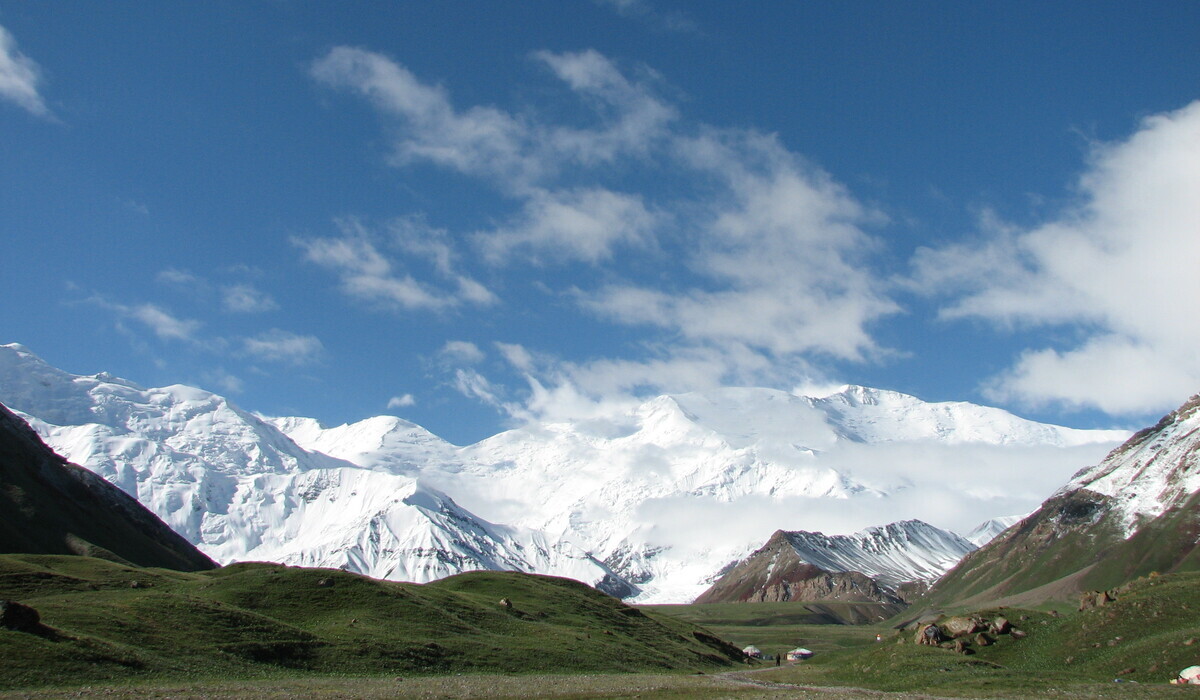 Lenin Peak (7134m) – is situated in Zaalaiskii mountain ridge of Pamir range on the border of Kyrgyzstan and Tajikistan. In Kyrgyzstan it is situated in Chon-Alai region in Osch oblast. In Tajikistan it is in Gorno-Badahshanskaya autonomous region. Zaalaiskii mountain ridge raises Alai valley as a big snow wall. There are several large glaciers on the slopes: Lenin Peak from the north and Oktyabrskii, Bolshaya and Malaya Saukdara from the south. The southern slopes are more difficult of access because of long distances between them and itineraries. The northern and southern slopes are about 40-50 degrees. Snow avalanches are often on Lenin Peak. The snow line on the northern slopes is at 4200-4500m, on the southern slopes – 4800-5000m. There is an approach for vehicles to the Lukovaya Polyana (Onion Meadow) to Lenin glacier. It takes about two days to approach the starting point of the route from the mail road if you go from the southern side. That is why most of the climbers prefer the northern side.

The Peak was discovered and described 1871 by a great Russian geographer and traveler Aleksei Pavlovich Fedchenko. He named it after Konstantin Pavlovich Kaufman, the governor-general of Turkestan.

1928 the Peak was renamed Lenin Peak.

Lenin Peak was considered to be the highest in Pamir mountain range and in the USSR till 1933 they climbed it and found out that it was lower than Communism Peak (7495m), called Stalin Peak at that time.

The German alpinists Karl Wien and Eugene Allwein were the first to climb it the 25th of September, 1928. They did it during the Soviet-German expedition headed by Gorbunov.

People’s commissar Krylenko also took part in this expedition. Later almost all soviet participants of the expedition were executed by shooting. Only two people survived accidentally – cameraman Shneiderov and one of the leaders of the expedition Shmidt. During the repressions he was in a long-termed polar expedition.

There was little information about the very first climbing as it was done by the Germans. Their itinerary was from Saukdary and then from Krylenko pass to the Peak. The second to climb the mountain were participants of army alpiniad – K. Chernuha, V. Abalakov, and I. Lukin. It was 1934. Their itinerary was from the northern side. Later it was called “the itinerary over Lipkin’s rocks”. There were no signs of people found on the top by this group. And they were considered to be the first people who climbed the mountain. Later they arrived at the truth and now the Germans are considered to be the first.

1973 a group of 8 alpinists headed by Lev Barhash reach the top. It was the third climb.

The 14th of August, 1950 a group of twelve alpinists of Turkestan military district climb Lenin Peak for the first time after the war.
One of the mass ascents took place 1967. At that time 300 people took part in it.

Nowadays there are 18 alpinist itineraries to the top. Nine of them go on the southern side and nine on the northern side. The classical itinerary is on the northern side over Razdelnaya Peak. It does not require a special technical preparation or big alpinist experience. It is only required to be healthy and have a great wish to do it. That’s why Lenin Peak is considered to be one of the easiest to achieve mountains over 7,000 metres high. Although there were several rather tragic records established. 1968 the very first group parachute jumping at 6100m was successful. The same year a group parachute jumping at 7000m was tragic – 4 parachute jumpers died. The very first ski downhill was made by alpinist Suloev 1968. The year of 1974 is remembered by the most alpinists as a very tragic one. 8 women alpinists died during a traverse of Lenin Peak. 1990 there was a snow slide in the region of the Camp 2. 43 alpinists died. Their remains were found only 2009. Though, in general there aren’t any accidents and everything depends only on the weather conditions.

On the 4th of July, 2006 the Peak was renamed after Abuali ibn Sino by the decision of Tajikistan government. On the territory of Kyrgyzstan it remains Lenin Peak.

The badge for climbing Lenin Peak.

1957 there was instituted a prize badge “Lenin Peak” at the initiative of V.I. Razek. The badge was presented to those alpinists who reached the top of the Peak. From the day of its establishment, the badge was presented by Razek Vladimir Iosifovich to more than 2000 of alpinists from many countries and of all continents of the world. After his death the honour to present the badge “Lenin Peak” was given to his family. Nowadays after his wife Galina, eldest daughter Nadezhda with her husband and her son had left for the USA (the Irina the youngest daughter of Vladimir Iosifovich lives in Moscow), there is no one to re-establish the system of awarding those alpinists who visited the worldwide famous Peak.

The itineraries to the top of Lenin Peak from the northern side.

The itineraries to the top of Lenin Peak from the northern side.

Route 7. – Over the Peak of 30th anniversary of Uzbek Republic – instructor N.Shabanova, 1970

Route 8. – Over north-eastern slope of the eastern crest – instructor R.Benua, 1974

Route 9. – Over north-eastern slope of the eastern crest (a variant) – instructor S.Duog, 1974

THE CLIMATE IN THE REGION OF LENIN PEAK

The climate in the region is very contrasting. In the low part it is temperate, in the higher zone the climate is more severe polar. The summer is short; it lasts from June till August. In the highland the warming up comes late that’s why while July is the warmest month in Alai valley, on the mountain slopes it is August.

The variations in temperature are rather considerable. In the summer time they can reach from +5 degrees at the daytime till – 30 degrees at night.

With heightening the temperature falls approximately 0,5 degrees for each 100 meters of elevation.

The winds have south-western and western direction. In the daytime the wind speed reaches 6-8 m/sec., and it slows down to 2-4 m/sec. And sometimes it calms down up to dead calm. Though in the daytime sudden and strong gusts up to 15 m/sec and more can be registered. Glacier snow that forms as the result of stormy winds higher than 6200m can be noticed in the higher part of the crests of Zaalaiskii mountain range.

These winds are the most dangerous during the mountaineering.

The cloudiness is insignificant. The most cloudless period is in August. As a rule, the weather becomes worse, and it snows at the end of August. There is more precipitation in July than in August. In the second part of September there is a period of settled weather again.

Storms and fog are rare here. Every day after 14 o’clock there are strong winds in the region of lobes. The air streams head down in the valley and can blow off weak fastened tents.

The best time for climbing Lenin Peak is the first part of August. Although in general the weather is good, there can be long periods of bad weather (up to 4-5 days).

The approach to Lenin Peak is from Osh town that is region centre. This is where all expeditions to Lenin Peak start from. The way goes from Osh over Pamir road Osh – Horog. First over Chigirchik pass to the region centre Gulcha (120km), then it goes to Taldyk pass of 3650m. A small descent and again a pass named after the 40th anniversary of Kyrgyzstan (3513m). From the pass the way goes down to Alai valley to Sary-Tash village. There is a guesthouse in the village. From Sary-Tash the road goes across Alai valley to Kashka-Suu village, and then up to the mountains in Achik-Tash hole to Edelweiss glade, where the alpinist base camps are situated. The glade lies at the height of 3800 m above sea level. The way from Osh to Edelweiss glade takes about 8-10 hours.